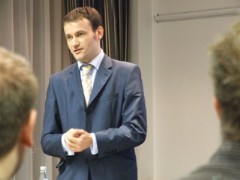 Manx marketing: Phil Woodford speaks at a meeting in Douglas, Isle of Man last month. The theme was the promotion of the island to investors.

David Ogilvy once observed that “people don’t go half way round the world to see things they can equally well see at home.” I was reminded of this pithy observation when I travelled to the Isle of Man last month on behalf of the Chartered Institute of Marketing. As well as spending an enjoyable couple of days at the International Business School in Douglas, running training sessions for local delegates, I had been invited to participate in an interesting meeting that focused on the question of promoting “Isle of Man plc” to potential investors.

Over the past quarter of a century, a thriving offshore finance market has developed locally which – together with the tourist industry – provides the employment bedrock for the Manx community. With an eye to the future, branding consultants and government officials have recently shot a video that demonstrates the island’s unique strengths, under the theme Freedom to Flourish. The approach is well researched and thought out and I wish them luck with it.

In preparing for the meeting, I spent some time looking at the whole business of location branding and some of the techniques that are used to encourage both tourism and inward investment. There’s no doubt that a place can become a brand in exactly the same way as a business, product or service. Its name and reputation can evoke a mood and contain a sense of promise. Australia, for instance, conjures up immediate images in my mind of open spaces, sunshine, a free-spirited population and a down-to-earth honesty. The kind of positives, in fact, that most global corporations would die for. The current “Where the bloody hell are you?” campaign doesn’t create these notions in our mind for the first time. It simply reinforces existing preconceptions and never finds itself having to work too hard.

Although it’s rather trickier to plot a creative route when your location lacks a distinct identity, the blank sheet of paper certainly has its attractions. It might be argued that if your target audience doesn’t really know who you are, you can become almost anything you want to be. Toby Chambers, Creative Director of the style magazine Wallpaper* was quoted recently in The Sunday Times as saying: “Cool destinations are those that people haven’t thought of yet. People are searching off-piste as other places become exhausted.” And there’s the added advantage that you usually do have something quite unique to distinguish you. Authors S D Jaworski and D Fosher argue that language, separation, diversity and experience combine to make something quite special¹. It’s not as if we’re distinguishing one model of PC from another, after all.

The reality though is perhaps a little more complex and restrictive. Cities, regions and nations are understandably sold largely on the basis of their geography, history and culture. And these are things that are actually fairly difficult to change. As Philip Kotler – a Professor at Kellogg Graduate School of Management in Chicago – has pointed out, you can’t easily swap beaches for mountains².

One thing, however, is beyond dispute. The battle to build brand awareness and attract visitors and investors is intensifying year on year. Huge sums of money are being spent. And some rather unusual creative approaches are being adopted. Prior to this year’s FIFA World Cup, for example, I was fortunate enough to win a competition sponsored by the German Tourist Board. One of my prizes was a football signed by Sir Geoff Hurst, the only player ever to have scored a hat trick in the final of the competition. Sir Geoff has played an important role in convincing the British to consider Germany as a tourist destination. The whole campaign – based around the idea of destroying stereotypes – has a quirky and perhaps rather brave flavour to it.

No matter how good the advertising and marketing campaigns, you should never discount the importance of individual ambassadors. Just as an employee may be the living embodiment of a corporate brand, the residents of the Isle of Man have their own part to play in promoting the Manx offer. On my short journey from Douglas back to the airport on the southern tip of the island, I encountered a lady taxi driver who engaged me in conversation. She was a university graduate and had spent time in the Republic of Ireland and also Switzerland, where she had managed a bookshop. She’d made a conscious decision to return to a place that she genuinely loved. And, believe me, there’s no better advertisement than that.

² Mapping a country’s future by Randall Frost on www.brandchannel.com

Phil Woodford is an associate lecturer at University of the Arts London and acts as a mentor to students on the New Creative Ventures course, jointly sponsored by the London Business School. www.philwoodford.com