Time to prepare for the mass market of one

No one wants to get left behind in the world of digital marketing. But it’s probably best not to get too far ahead either.

One contributor from the floor of CIM’s Digital Summit in London today recounted how his agency had stopped talking about old-fashioned things like websites and opted instead for the vogue term of ‘digital’. Trouble was, for this particular agency’s clients, the new terminology was more vague than vogue. They just wanted… err… a website.

At the other end of the spectrum, we have the young son of digital marketing guru and fellow CIM Course Director, Daniel Rowles. He’s grown up in a world of iPads, so when he goes to the TV, he is disappointed when it doesn’t offer the same touchscreen interactivity.

Although these two anecdotes perhaps sit at opposite ends of the spectrum, one can’t help thinking they reveal something of a truth. While digital-savvy marketers, hipsters and toddlers speed away towards a technological nirvana, other people – stuffy corporate boards, anxious compliance officials and perhaps an older segment of the general population – get left on an analogue hard shoulder.

The one-day CIM forum, held at Bloomberg’s uber-cool headquarters in London’s Finsbury Square, inevitably couldn’t grapple with all the social and political implications of the developments we see around us. But it was certainly able to provide an interesting glimpse of the way in which the business and marketing world is adapting. Some of that change was evident in the room itself. At conferences in 2013, it sometimes seems as if more people are tweeting about the speakers than listening to them. And there are people tweeting that perhaps people oughtn’t to be tweeting. It may be a kind of insanity, but I’m afraid I’m part of the cuckoo’s nest.

Let me try to summarise some of the critical trends, with reference to observations from contributors.

There was quite a lot of talk about the process of managing digital transformation within organisations. I admit that this is outside my own area of expertise, but the buzzword is ‘iteration’. You try stuff and then use what you find out to inform your next attempts.

It’s clearly an approach that digital developers and marketers embrace, but it can sound a little high-risk to bean-counters and suits. The BBC had an interesting way around the problem. Eva Appelbaum and Alex Butler explained they’d set up a lab, in which ‘positive deviants’ were free to experiment. Although this wasn’t a bricks-and-mortar affair with test tubes and conical flasks, it was a brand within the BBC and a space for free thinking. I really approve of this kind of dreamlike creativity and it has applications way beyond digital marketing.

Another interesting thing they’d done was to hold ‘hack days’. This is the kind of stuff I’d only heard about previously in relation to crazy west-coast tech environments, where everyone works intensively for 24 hours on pet coding projects or collaborates on off-the-book concepts. At the Beeb, they seemed to be using the concept to reinvent Eastenders and Radio 4. Perhaps people will be able to get their shipping forecasts online in future and spare the rest of us?

Alwin Magamay of Deloitte Digital had taken the bold step of bringing a lot of his digital production and creative work in house. When I caught up with him in a break, I discovered the structure worked because he’d had the freedom to draft in top-notch creative expertise. I felt there was a sense in the air today that some agencies felt a little bit twitchy that they were outside the digital tent of some big organisations. One participant even directly asked just what he had to do to break into the BBC’s roster or pitch his ideas to the decision-makers at the corporation.

For me, the key ideas to take away revolved around specific media platforms.

Louise Brice from Ipsos ASI described mobile as being ‘the new normal’. Research published as part of CIM’s June 2013 Social Media Benchmark survey shows that investment in the medium has risen significantly over the past year. One clear issue that needs to be addressed, however, is the need for marketers to optimise their web content for people’s smartphones. The research shows that dwell time increases considerably when you do it, but many respondents say they don’t have the money, lack the expertise or think that it isn’t necessary. (I also mischievously raised the point that some supposedly ‘optimised’ sites don’t actually provide a good user experience anyway. The response from the panel was that it’s still early days. We need to understand that people may actually want something completely different on mobile.)

Google’s Richard Robinson and Stewart Easterbrook, long-standing CEO of Starcom MediaVest, joined us for the final question and answer session.

Easterbrook made the interesting observation that although TV is now, in fact, 100% digital in the UK, the behaviour around it is still analogue. That’s a big idea and we couldn’t really do it justice at the end of the day.

Robinson argued that agencies miss out by keeping areas of expertise – search, direct marketing, TV etc – in separate silos. In the modern world, this makes little sense. He also made a more fundamental point though. The new ‘mass market’, he said, is the mass market of one – ‘me’. In my view, this notion is right at the heart of the digital transformation. We have the technology available to ensure that messages and content are genuinely individual, rather than aimed at demographic target groups or product affinity segments. When this full potential is reached – and it may still be a number of years ahead – the industry I’ll be working in will be completely transformed from the one I originally entered. 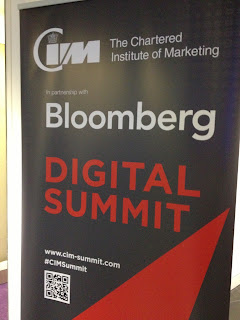