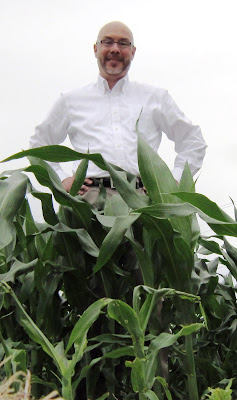 Harvest time: Indium Corporation’s Rick Short has been ahead of the curve with B2B social media and is reaping the rewards.

Running training courses with marketers on a regular basis, one of the most frustrating misconceptions I encounter is the idea that social media doesn’t have much application in the B2B environment. Blogging, tweeting and Facebooking are all very well in consumer-facing businesses, so the argument goes, but quickly lose their appeal if you need to communicate with professional audiences. One company which has been proving the critics wrong is Indium Corporation – a materials supplier to the electronics and semiconductor markets. Their Director of Marketing Communications, Rick Short, spoke recently to 108th Street about the successful strategy they’ve adopted.

At first glance, Indium Corporation seems an unlikely social media player. Headquartered in Clinton, New York – but with a presence as far afield as the UK, Singapore, South Korea and China – the business provides the solders, fluxes and other materials that are so vital to circuit board assembly. In fact, a trip to their website would tell you that this description is only really scratching the surface. Their engineers and technical experts make a lot of stuff that is pretty obscure to most of us, but vital to making the world go around. By and large, it’s fairly remote to anyone who isn’t also a card-carrying member of the engineering fraternity.

The company is fortunate to have Rick Short on board – someone with a reputation for early adoption of new communication technologies and a serious approach to delivering results. Short is also one of those extremely rare creatures: a technical expert who just happens to be gregarious and a natural in the social sphere.

“Very early on,” he tells me, “I not only saw that social media could be extremely powerful, but I also realised that the barriers to entry were low. Time to market is critical in situations like this. I knew that the only advantage I had was to be an early adopter. And that was my inspiration for the work we’ve been doing.”

He was helped in his mission by the fact that Indium – ever since its birth in the inauspicious Dust Bowl era of the 1930s – has championed the idea of conversation. “Back in the day,” he observes, “social media meant discussing technology face-to-face at a conference. We truly are a team of engineers and technologists having conversations with other engineers and technologists.” Short observed that in the modern era, the engineers in his business grew up with those engineers who worked for his customers. They had been to high school together. They were college roommates.

“My target audience of engineers are much more comfortable with my engineers than they are with anyone from marketing communications,” says the MBA-qualified marketer, whose work has been featured in numerous textbooks. “When I figured all of that out, I knew I had to turn my company inside out and put my engineers nose-to-nose with my target audience, full-time and exclusively. That’s how the idea of “From One Engineer To Another®” was born.”

Although it’s trademarked, the concept to which Short refers is more than just a campaign slogan. It seems to represent the whole corporate ethos of Indium Corporation. In practice, it has led to a number of really interesting social media initiatives – including a team of expert bloggers who answer queries, solve problems and generally chew the cud with their client-side counterparts.

Short is scathing about ‘the would-be puppet masters’ who try to control social media or vet the content generated by their colleagues. He understands the importance of maintaining a reputation, but firmly believes it’s a company’s actions and results that the audience hears.

“Stop with the Wizard of Oz style attempted manipulations and trickery,” he says, “and get with transparency and authenticity. It is really hard to convert a shy, reclusive technological genius into an interesting, transparent, social media star. I don’t bother. I seek out people who naturally enjoy engaging with others. To them social media makes perfect sense. Fish swim, birds fly. Don’t fight it. Use it.”

Does this mean that marketers can simply let social media run its own course? Short accepts that there are boundaries.

“I occasionally remind certain individuals on my team to stay clear of anything that feels like commercialism. Ad-speak is so ingrained in us all that it is easy to drift there. And, rarely, I have to remind people to be sure to carefully guard corporate secrets. Scientists love to share, so sometimes they get a little over-enthusiastic. My team are all very skilled, careful, and responsible, so my role is miniscule in this regard.”

It’s a little hard to see how Short has achieved corporate buy-in for his extensive social media activity though, which includes the YouTube videos, Facebook and Twitter presence we’d more normally associate with a retailer or lifestyle brand. In what must be a fairly conservative sector, doesn’t it all seem a little rock and roll? Short’s clear focus on ROI is what tips the balance.

“My mantra is ‘content-contact-cash’,” reveals the Indium director. “That’s where the rubber meets the road.” He sees his lead generation work as focusing on the ‘contact’ part of the equation, although he recognises the absolute importance of content too. “Without content, you’re just a blowhard,” he argues. So, in addition to the predictable online metrics of visitor numbers, page dwell time and so on, Short has been gathering clear evidence that strong content drives the type of peer-to-peer discussion that ultimately leads to sales.

Where is Indium Corporation’s social media strategy likely to go in the future? Rather than give the easy answer and start reeling off vogue websites and mobile apps, Short is realistic. “Social media has settled down with regard to platforms. Right now I see progress occurring only in nuanced ways. So, the face of our programmes will remain unchanged for the foreseeable future.”